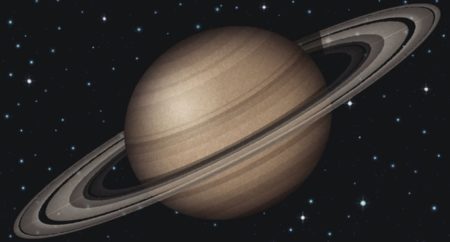 In Vedic Astrology, Saturn is the outermost planet in the solar system. Saturn in Vedic Astrology is referred to as “father time”, because it is the last planet that we can see with the naked-eye, signifying endings. Basically, this translates to death, as all mortal days are numbered. The rings around Saturn are representations of the limitations and boundaries of our personal lives. It also functions as a celestial boundary, because it is the outer-most planet, and last object in our solar system that can be seen without a telescope. Without boundaries, it is impossible to differentiate between one thing and another in this physical world. Other than “father time”, Saturn is also referred to as “the reaper”, as in we reap what we sow. It is the score-keeper of our past and current karmic deeds. The reaper is responsible for endings, dissolution, decomposition and death. Sounds grim, I know, but it is a necessary function in the life-death-rebirth process. Without a necessary end, there would be no cycle of a new beginning.

Saturn is named after the Roman God of Genealogy and time. The Greek counterpart of Saturn was Cronos, who in Greek Mythology was the father of Jupiter, Neptune and Pluto, and was known as the Titan of the Harvest. To Astrologers, Saturn is a “malefic”, meaning that it tends to bring bad luck and misfortune (Saturn is known as the greater malefic, while Mars is the lesser malefic).

The Astronomical function of Saturn’s movement through the 12 zodiac signs is slightly over 29 years, therefore, it travels through each sign in roughly 2.5 years. Saturn is the 7th classical planet corresponding to the 7 days of the week, to which it represents Saturdays, or SATURN-days. Since Saturn represents completion and endings, it is appropriate to draw the parallel to religious literature describing that ‘upon the creation of the universe, God rested on the 7th day’, which is why Saturdays are observed for the Sabbath as a day of rest.

In Vedic Astrology, Saturn is activated in your chart at the 35th year, where it matures and begins to exhibit its full strength. We usually experience important changes creating either upheaval or security around this age. This would be after the dust settles from the upheavals of the infamous “Saturn return” from age 28-30, where Saturn returns back to the place where it sits in a person’s birth chart. Just as we have a solar return (birthday) every year, we also have a Saturn return every 30 years or so. Ultimately the purpose is to create a better, more solid structure of permanence in our lives, not just to torture us.

Saturn is time and space. It is pressure, containment and gravity. It condenses energy into form, creating the physical world of matter bound by time. When people ask you “what is the matter?” they really are asking, “what is the Saturn?”. Other qualities that Saturn represents are delay, constriction, obstruction, blockage, and obstacles. It is also fear, sternness, coldness, hardships, illness, hard labor, task-master energy, rules and tradition. Whereas Jupiter is expansion, Saturn is contraction. Maybe this is why news that someone is going through their “Saturn return” is received with groans. It has a reputation of bestowing restrictive energy that creates conditions of poverty and hardship. However, the only way this can be avoided is to do what Saturn asks of you, which requires effort, organization and strict discipline. On the positive side, Saturn signifies our career, hard-earned success, binding contracts, and wealth. We gain by reaping the wealth of our efforts!

In the world, Saturn represents our elders, but it is also bosses, the government and old souls. It is an indication of many things too numerous to list here, but for example, it also represents bones, disease, dirt, agriculture, wealth and time. The symbol, or “glyph” of Saturn is a sickle, which traditionally is used for harvesting grain. Again, we see the reaper motif of reaping of what we sown. Another interpretation of the symbol is a crescent moon extending from the right bottom portion of the cross. The cross of matter takes precedence over the mind, symbolized by the moon’s crescent. It is the flipped image of Jupiter’s glyph. Where Jupiter is the sowing of seeds, Saturn is the reaping of crops.

Wherever Saturn is placed in our chart indicates the biggest challenges we get to overcome in order to grow in strength. The biggest blessing from Saturn is the rich, fruitful reward of our toil. Saturn rules the signs Capricorn and Aquarius, and is exalted in Libra, which is a sign of balance, equality and fairness. Saturn only rewards us with what we have rightly earned. People don’t tend to appreciate something unless they feel they have truly earned it. This is the beautiful lesson that Saturn teaches us.