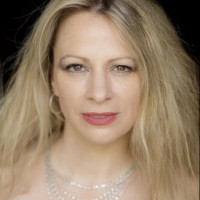 Melissa St. Hilaire grew up in the backwoods of Massachusetts in the shadow of Salem, had her first mediumship experience at age three, began reading tarot cards at twelve, and has been mystified by the occult ever since.  An Intuitive Reader and Medium, she hosts a Psychic Development Circle series, Victorian table tipping seances, and was recently selected to be one of four psychics for Midsummer Scream’s popular Leota’s Lounge at the Grim Grinning Gala.  She’s the founder of @AmericanWitch13 on Instagram where she shares custom spells, witch tips, and memes.  An author and researcher, she wrote horoscopes for The Heights Inc, her poetry has appeared in the periodicals Shards, The Outer Fringe, and The Laughing Medusa, and she has written articles for Feminine Power Circle, Savvy Authors, SF Signal, and The Qwillery, among others.  She has also appeared in the anthology books Folk Horror Revival: Field Studies and Folk Horror Revival: Corpse Roads.  She co-wrote the dark fantasy trilogy, Saurimonde, and is currently finishing a sci-fi novel called X’odus.

An Intuitive Reader and Medium, Melissa hosts a Psychic Development Circle series, Victorian table tipping seances, and was recently selected to be one of four psychics for Midsummer Scream’s popular ... END_OF_DOCUMENT_TOKEN_TO_BE_REPLACED