Genesis of The Green Man Store by Ashley 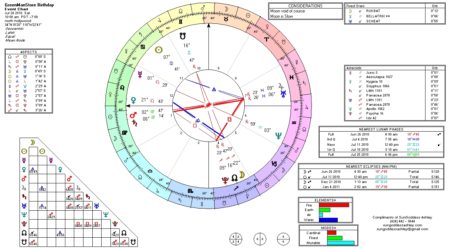 The thought had come to me that it would be fun to run the birth chart of the Green Man store, for the purpose of seeing who the store would be as a person. Personality traits are not limited to people, as you can tell by getting a certain “vibe” when you enter new places. Astrology charts are not just for horoscopes of people and animals. You can run charts for events, which are known as “Horary charts” in Western Tropical Astrology, and “Prashna” in Vedic Astrology. Just as people and animals are born, so are things, businesses and ideas. Because I offer Astrology & Tarot readings at the store, I was curious to see who the store would be as a person-ality, since we spend quality time together during the week.  And anyone who has stepped foot in the Green Man will find it apparent that the store is alive. Prior to running the chart, I had expected to see a prominent 8th house, being that it is a metaphysical bookstore and apothecary, which features readers and healers; all themes of the 8th house. I ended up seeing some of what I expected, and my curiosity was satiated by discovering so much more! So let’s look at The Green Man Store as a living being.

I ran the birth chart for the first official day of business on July 24, 2010 at 10:00 AM, PST, the time the doors first opened in North Hollywood, California. The birthday of the Green Man shows a Leo Ascendant, Sagittarius Moon, and Cancer Sun. More specifically, the Sun is in Pushya Nakshatra, the Moon is in Purva Ashadha, and the Ascendant is at 26 degrees, 40 minutes of Leo.

Funny enough, the ascendant of the chart is exactly, to the degree, between two lunar nakshatras within the solar sign of Leo. Therefore, if the store first opened the door for business at 9:59am, it would distinctly be a Purva Phalguni Nakshatra chart, which would make it a more fun, festive energy. If it opened at 10:01, it would otherwise be an Uttara Phalguni Nakshatra chart, which would make it a more intimate and logistical energy. I find this especially significant, as it is difficult to pinpoint which side of the line to attribute the chart; it is essentially a marriage of both. This is commonly known as a “cusp” sign in western astrology. A term which blends the characteristics of two signs together. Since the ascendant of the Green Man’s chart is straddling the dividing line of these two lunar signs, it would be considered to have “cusp” energy, where it integrates qualities of both the nakshatras. This has special meaning, because Purva & Uttara Phalguni Nakshatras are known as the two “marriage mansions”. Briefly, these nakshatras signify the importance of alliances and contracts in any type of marriage, including the union of people coming together for business. This could indicate co-ownership of the store, but more importantly in this case, the intimate marriage partners of the store would be the staff, patrons, students, healers and readers. This is perfect for a business entity that will endure through its commitment and loyalty to partnership, which is equally beneficial to the store and the public.

In Vedic Astrology, there is more emphasis placed on the Moon sign than the Sun sign, as seen through the importance of the lunar mansions, known as nakshatras. The Moon is the main functioning personality of the store, and how it is viewed by the public, whereas the Sun is the soul, and primary focus. I will briefly touch on the Store’s Cancer Sun in the private and spiritual 12th house, which is a moksha house. Moksha houses serve the purpose of liberation. There is a low-key energy to the store, which is genuinely interested in helping people find their way, and seek relief from their worldly problems, through connection to Spirit. The focus here is not commercialized, pre-packaged productions, or merely a religious facility, rather, its goal is sincerely attracting people who are spiritual seekers who want to connect to Spirit through all Divine expressions, and honors that all paths lead to Source. Another interesting aspect to point out of the Sun in the hidden 12th house, is that it gives the store a quality of being inconspicuous on a busy, main artery of North Hollywood. It’s visible enough to be exposed to foot traffic, while still being tucked-in and protected.

Being that the Sun is in Pushya nakshatra, within the sign of Cancer, the energy of the store is very protective by nature, emanating a mothering, nurturing and lovingly healing energy. Pushya is titled as “the Star of Nourishment”, which the store then provides in a multitude of healing ways for its children. Cancer is the archetypal mother who protects her children and loved ones, and values family first and foremost. Just as a mother recognizes that her children are unique individuals who have different needs, the attentive and caring aspect of the store would be willing and able to customize “nourishment” provided to meet the specific needs of her children. The Green Man would consider staff, participants, patrons, teachers, and readers as extended family members included in a larger spiritual family.

Whereas the Sun shows purpose, the Moon shows personality. The Purva Ashadha Moon indicates how the Green Man mainly interacts with the public at large. Purva Ashadha is titled, “the Star of Invincibility”. One way to interpret this is as “earlier victory”, which means that success is given early on and initially. What is wonderful about the Green Man’s birthday being under this star is that yes, the store has room to grow and achieve its goals throughout its life, but it doesn’t have to struggle, or wait for years and years down the line to become successful, as could be indicated by the following nakshatra’s quality of having a “later victory”. The initial clear and pure intentions that the store wants to achieve would allow for success early on. These intentions and goals would revolve around Sagittarian themes, such as the goal of seeking truth, higher principles, knowledge and education, as well as devotion and commitment to a higher cause. The Moon, which represents the public, is in the 5th house of the mind, enjoyment, learning, play, fun, creativity, children, and child-like wonder.

In Vedic Astrology, the Dasha system functions as the main source of prediction, primary to transits.  It is a time-table that shows current running planetary energies. The Main time period is called the “Mahadasha”, which shows the main planetary energy, and the “Antardasha”, is a sub-category time period, which shows the supporting planetary energy. For example, if a person is running their Jupiter Mahadasha, the planet Jupiter would be illuminated in their chart as being an “active” planet that gives results of the house it occupies, and the houses it rules in the chart. If they are then running their Mercury Antardasha, the planet mercury would also be illuminated in your chart as being “active” giving results of the house it’s in and the houses it rules, but the results produced from Mercury would be in support of Jupiter, since Jupiter is running the main dasha.

My intentions are not to be making any specific predictions for the store, however I wanted to bring up an interesting observation about the Dashas of the Green Man, to see energetic trends soon activated, and currently at play.

The Green Man has been running its Sun/Rahu dasha period from November 15, 2017 and will enter the next dasha time period of Sun/Jupiter on October 10th of this year. Rahu represents extra-ordinary energy, catalysts for evolution and growth, some unpredictability, destiny and fated circumstances; but more specifically, since Rahu also represents magic, spell-work, witchcraft, divination, and occult arts, so this is an opportune phase for the store in this regard. A lot of the things Rahu represents are a focus of what the store specializes in, so this would be seen as a phase for the Green Man to naturally shine for the authentic talents it offers the public. Since Rahu is natally in the 5th house of entertainment, learning, the mind etc., this is highlighting a time prime for magnifying these areas. The moon is together with Rahu in the birth chart, so the store always has these ongoing, natural qualities occurring beneath the surface, whether or not it is an active running dasha planet. Dasha periods emphasize what is already happening in the chart.

When the Sun/Jupiter period begins on Oct. 10th, this would activate an ideal time for classes; especially since Jupiter natally resides in the 8th house of occult, magic, sorcery etc. Jupiter represents wisdom, teachers, guidance and classes, and operates well in the Green Man’s chart, because it is comfortable in its own sign of Pisces. This gives Jupiter’s style of teaching to be occultic, in the sense of conveying a more pure, and true spiritual mysticism. Jupiter is sitting in its ruling sign of Pisces in the 8th, but it also rules the 5th house of Sagittarius for the GM’s chart. Therefore, teachings will be a blend of the the 8th house of magic and the 5th house of creativity. At the beginning of this article, I disclosed my hunch prior to running the chart, that the store would have a prominent 8th house. Jupiter, a great benefic, who amplifies blessings, and bestows blessings resides in the 8th, which it rules, and additionally rules the 5th, where Rahu and the Moon are located. The store actually has a phenomenal chart for teaching, which I see bringing out even more of this natural ability during the next dasha phase of Sun/Jupiter beginning around the celebrations for Samhain.

In a nutshell, the Green Man is a person who clearly shows the innate wisdom of spiritual and occultic teaching, expressed through its commitment and capacity for embracing, helping and healing its soul-family find their way beyond earthly problems through magic, learning, and devotion to higher principles. 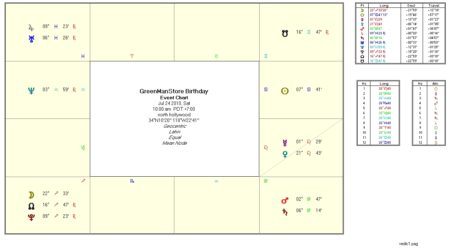